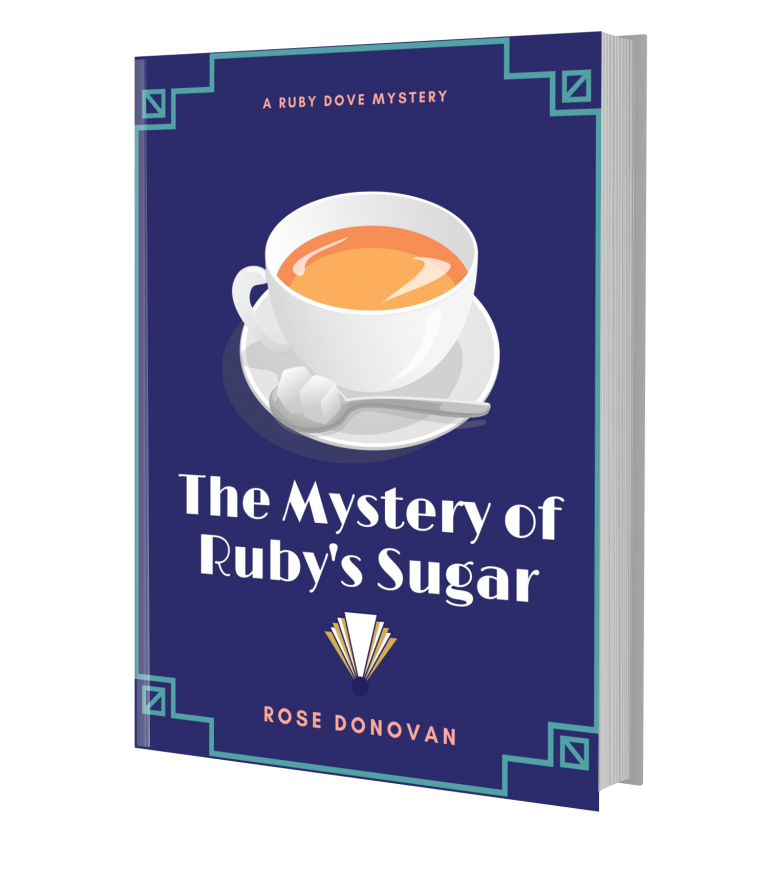 The Mystery of Ruby's Sugar

A locked room. A secret letter. A weekend to solve a murder.

The snow lies heavy around Pauncefort Hall. Dress designers Ruby Dove and Fina Aubrey-Havelock leave behind their Oxford exams to rescue Lady Charlotte’s wardrobe. But what Lady Charlotte doesn’t know is that Ruby is on a mission—a mission to avenge her family and bring down an empire. 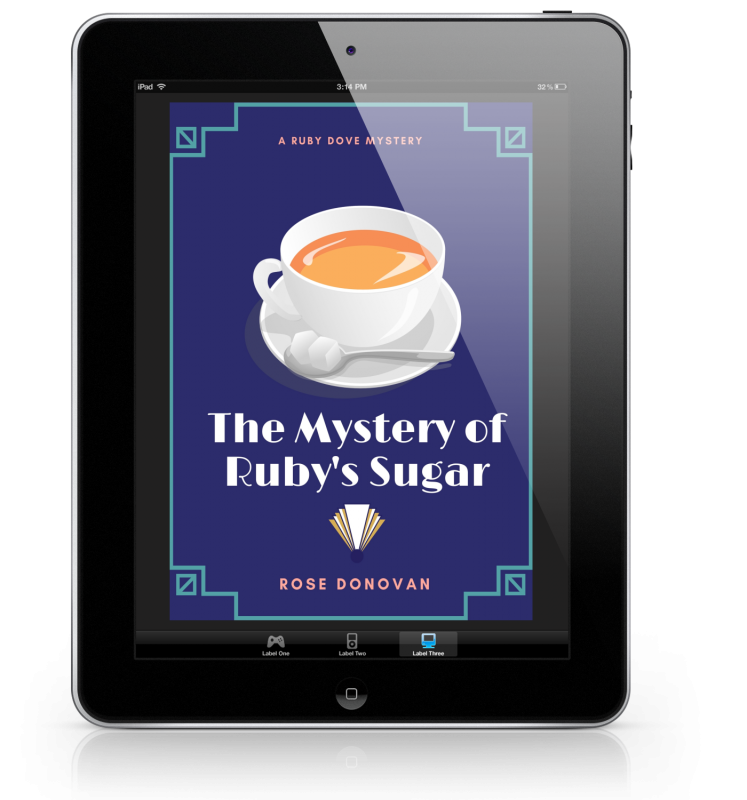 As the weather worsens, Ruby and Fina are drawn into the intrigues of Lady Charlotte’s other guests, who include a princess, a furiously left-wing don, a West End starlet—and, it seems, a murderer. After the two resident cads are poisoned, Ruby and Fina must find the culprit and still carry out their secret plans—all before the law arrives. But Pauncefort Hall can remain snowbound for only so long.

The Mystery of Ruby’s Sugar is the first book in the Ruby Dove historical cozy mystery series.

Pour yourself a warm beverage and nestle down with The Mystery of Ruby’s Sugar this evening.

The Mystery of Ruby's Port

A ship full of suspects awaits Ruby and Fina. Will they find the murderer before their own secrets are uncovered?

Cruising to disaster, Ruby Dove and Fina Aubrey-Havelock face down a murderer who is slowly crossing names off the passenger list.

As the SS Sanguine sets sail from the Bahamas, Ruby and Fina eagerly await the excitement promised once they dock in Trinidad. Ruby pays her way as an apprentice to a French designer and Fina tags along as a governess to a wealthy widow’s son. Ruby’s brother has also asked them to find a secret contact on board. Which passengers are genuinely eccentric and which are covering their true intentions?

Soon they have two mysteries on their hands…their contact and a killer.

In a race against time, Ruby and Fina are thwarted by stormy seas, subversive stewards, sordid scandals, salacious seances, scary scorpions and suspicious swine. They know all too well how many lives hang in the balance should they fail both their missions.

Read this review by the Puzzle Doctor! 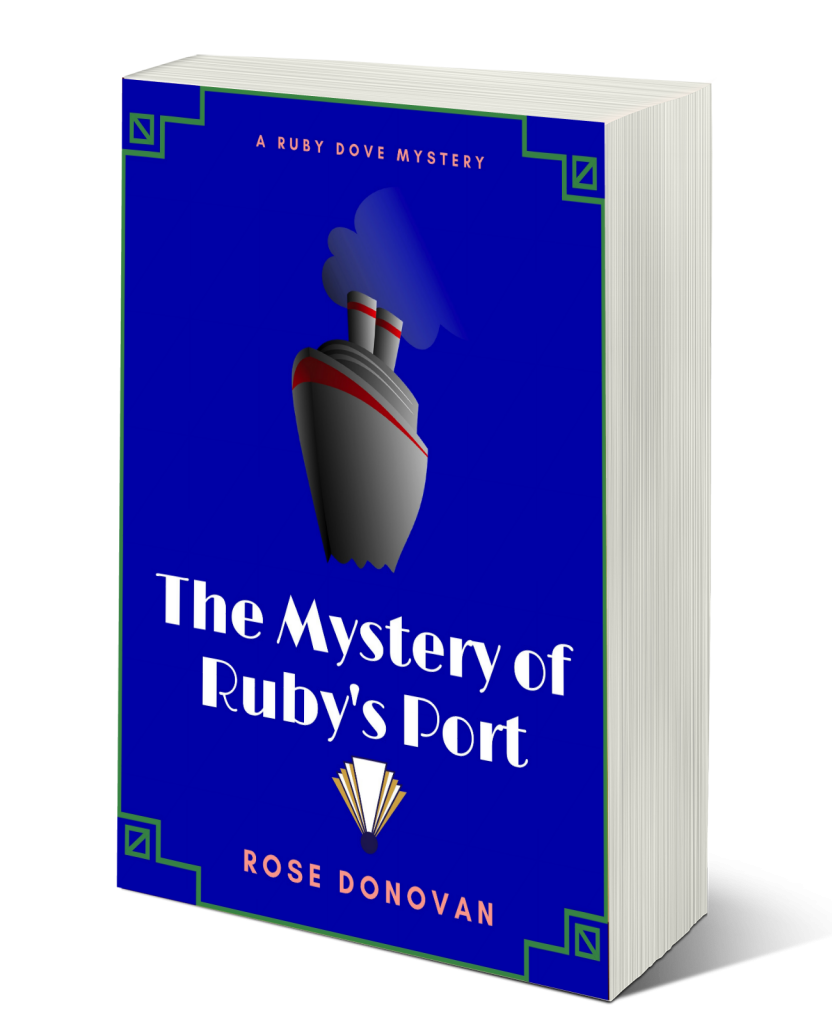 The Mystery of Ruby's Smoke 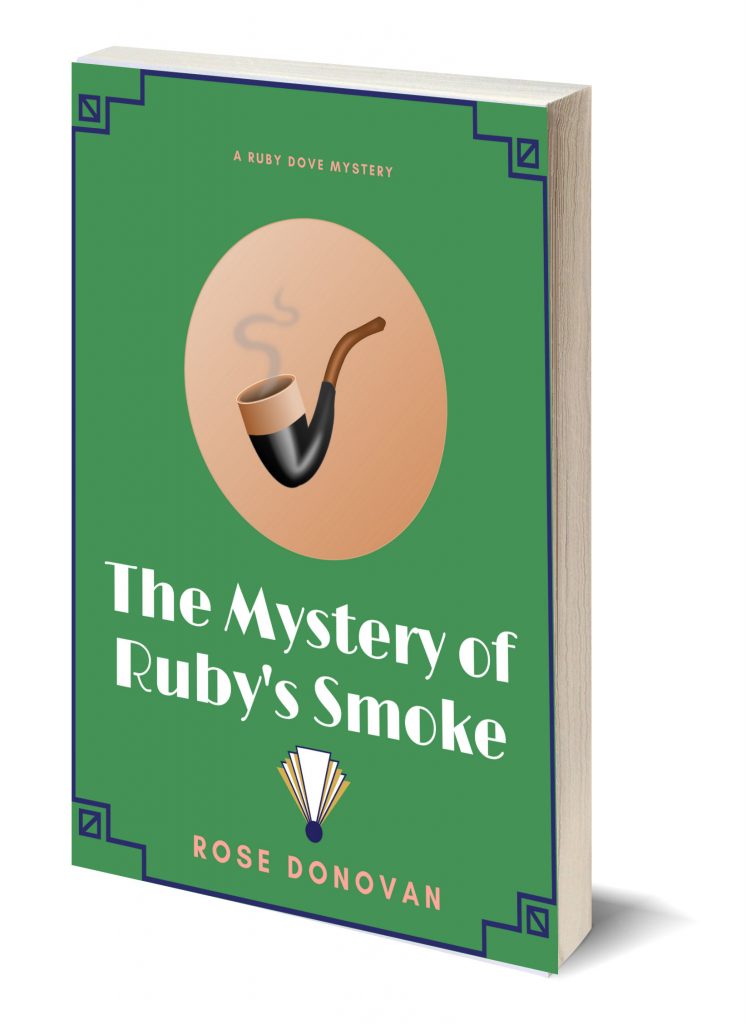 Someone is a spy.

Someone is a thief.

Someone is about to become a murderer.

Passing exams is the least of Ruby and Fina’s worries as they return to their beloved Quenby College. A thief lurks amongst the students and faculty, and when an infamous guest lecturer keels over at the Dean’s sherry party, Fina is shocked to find herself the prime suspect.

Determined to clear her friend’s name, Ruby launches into a hunt for a murderer that takes her to secret college boltholes, dubious pawnshops and a red-hot jazz club. At least she has allies she can trust – until a coded letter arrives, warning Ruby and Fina that one of their friends is not what they seem…

Will the pair evade the spy and find the killer in time to save Fina from the gallows? 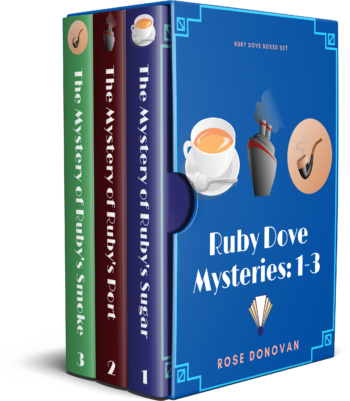 The Mystery of Ruby's Stiletto 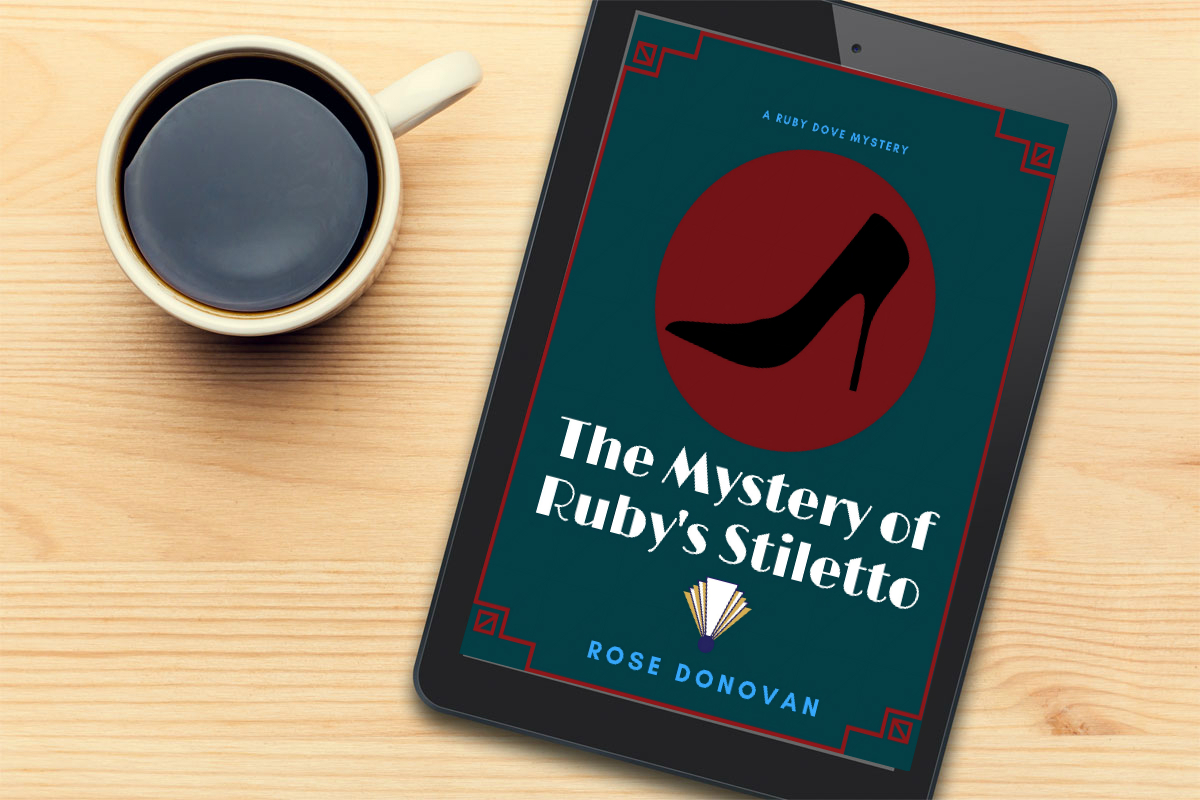 An invitation to an island off the coast of Italy. What could be more relaxing?

Nothing. Until a murderer strikes.

Ruby and Fina find themselves in a world of glamour once again, this time on a private island owned by a famous Italian shoe designer.

A riotous guest list of artists, flowing wine, passion and political intrigue guarantee a thrilling time for all.

But it could be a little too thrilling unless Ruby and Fina find the murderer.

The Mystery of Ruby's Tracks

Ready for a snowy ride aboard the Train Blanc?

With its velvet sofas and bone china teacups, the Train Blanc is a haven of 1930s luxury. But for Ruby and Fina, the trip holds some shocking surprises – not least that one of their fellow passengers is a murderer …

As the famous train steams through the cold Alpine night, the detective pair must work out which of the travellers is not what they seem. Could it be the friendly Swiss priest? The glamorous erotica author? The ‘artistic’ dilettante? Or even the grandmother with the hideous knitting?

Ruby and Fina are at the top of their game in this witty, sophisticated tale, which weaves together politics, fashion, intrigue and romance in a mystery with more twists and turns than a train track through the Alps. 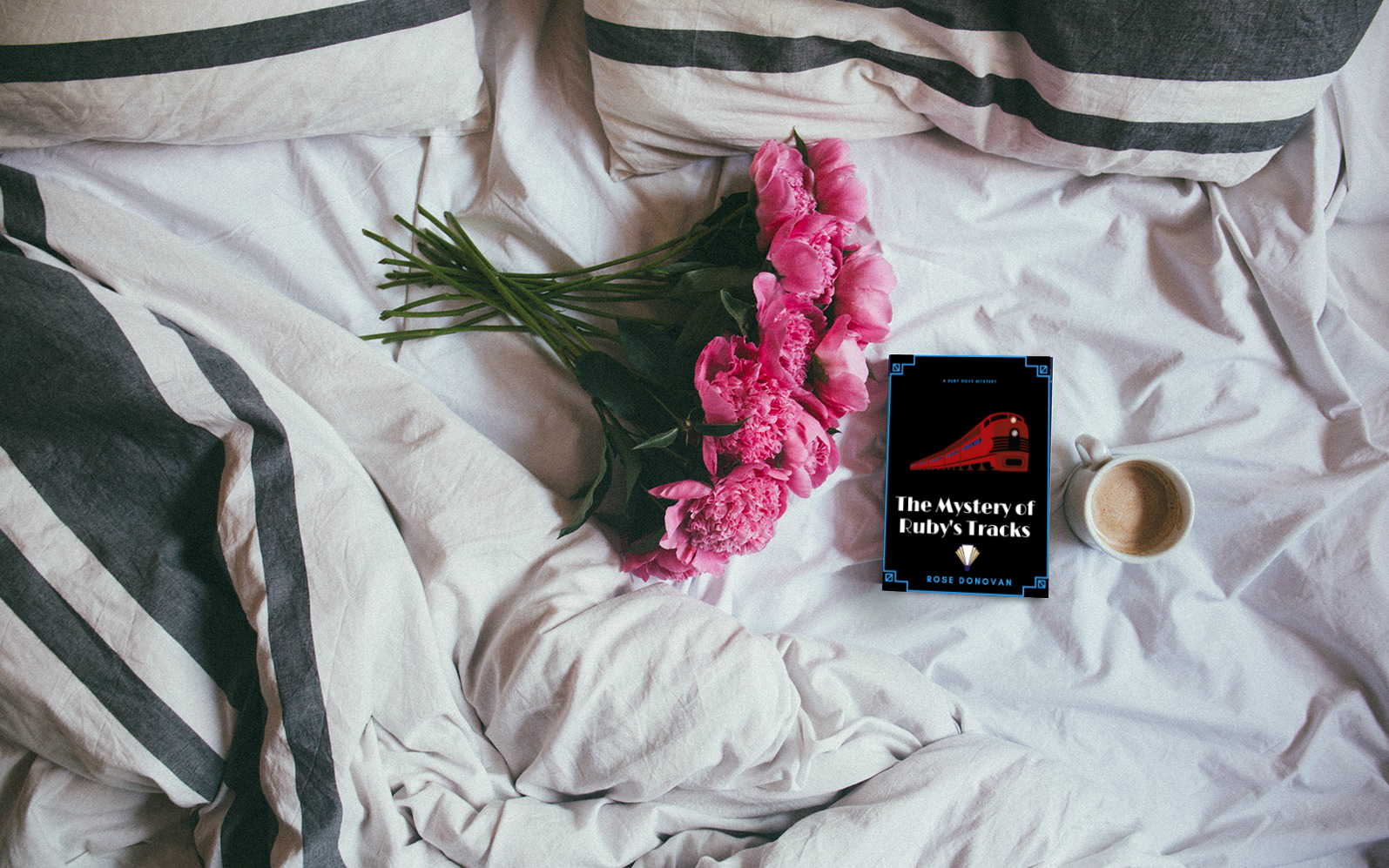 The Mystery of Ruby's Mistletoe 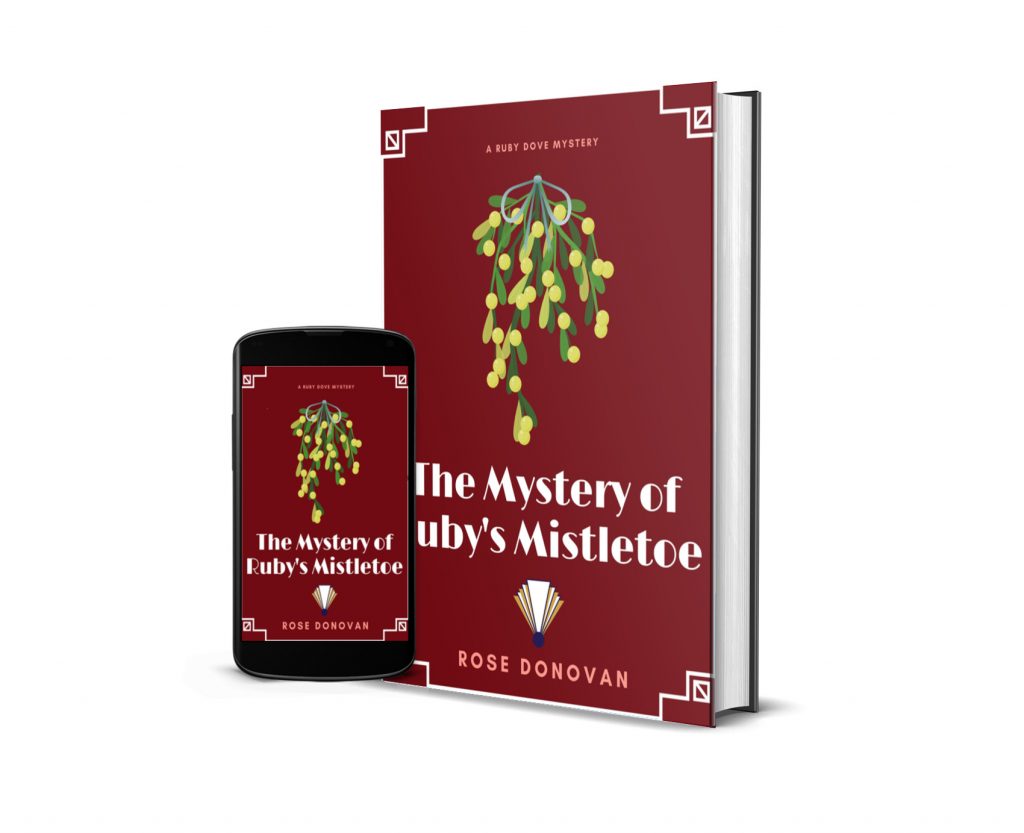 Until a murderer and a thief appear.

Ruby and Fina are anticipating a quiet Christmas. But the snowy peace of Quenby College is shattered when the police come looking for Ruby. She and Fina escape to a relative’s plush country home — only to find that Aunt Millie has a few surprises in store …

As the mercury drops, Ruby and Fina are drawn into a web of false identities and half-truths. Why did someone spike the cocktails during the after-dinner jazz? Who stole Aunt Millie’s priceless hatpin collection? Could it be a coincidence that all the house guests were also present on the day when Fina’s father was murdered?

With the police on their tail, and a killer on the loose, the two dressmaking sleuths have to use all their considerable wits to solve Fina’s family tragedy – and bring a little joy back to Christmas. 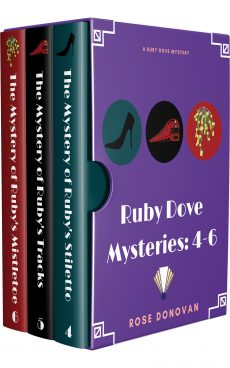 The Mystery of Ruby's Roulette

A secret mission to Lisbon.

A murder at the casino.

And a killer gambling on escape.

The clink of champagne flutes mingles with the rattle of the roulette ball. Fina’s on a winning streak. But just as she’s about to celebrate, someone gasps, chokes, and slides to the floor.

The Portuguese police treat it as a crime passionel, but Ruby and Fina have other ideas. Could the murder be linked to the high-level jewel-smuggling operation they’ve been asked to investigate? Working undercover, they scope out the other guests: a handsome airman, an icy princess, a genial mathematician, a suave croupier, and a Brazilian diva with flashy frocks and a personality to match. They all have something to hide – but the truth turns out to be far stranger than Fina could ever have dreamed.

Join Ruby, Fina, Pixley, and Gayatri as they battle with profiteers, saboteurs, assassins, and a ghostly apparition on their twistiest and most captivating adventure yet!

Scroll to top
We use cookies on our website to give you the most relevant experience by remembering your preferences and repeat visits. By clicking “Accept All”, you consent to the use of ALL the cookies. However, you may visit "Cookie Settings" to provide a controlled consent.
Cookie SettingsAccept All
Manage consent

This website uses cookies to improve your experience while you navigate through the website. Out of these, the cookies that are categorized as necessary are stored on your browser as they are essential for the working of basic functionalities of the website. We also use third-party cookies that help us analyze and understand how you use this website. These cookies will be stored in your browser only with your consent. You also have the option to opt-out of these cookies. But opting out of some of these cookies may affect your browsing experience.
Necessary Always Enabled
Necessary cookies are absolutely essential for the website to function properly. These cookies ensure basic functionalities and security features of the website, anonymously.
Functional
Functional cookies help to perform certain functionalities like sharing the content of the website on social media platforms, collect feedbacks, and other third-party features.
Performance
Performance cookies are used to understand and analyze the key performance indexes of the website which helps in delivering a better user experience for the visitors.
Analytics
Analytical cookies are used to understand how visitors interact with the website. These cookies help provide information on metrics the number of visitors, bounce rate, traffic source, etc.
Advertisement
Advertisement cookies are used to provide visitors with relevant ads and marketing campaigns. These cookies track visitors across websites and collect information to provide customized ads.
Others
Other uncategorized cookies are those that are being analyzed and have not been classified into a category as yet.
SAVE & ACCEPT